A crow and a baby had an affair 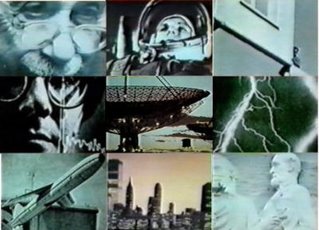 If you know where the title of this post comes from than we should be the best of friends. But please don't run away if you don't think so.
I listened to that whole album the other night and thought how genius the whole thing still is. *
"Toyota City" indeed does make me think of cars. Driving on a lone highway with streetlamps glaring off the windshield. During the night off course when the stars are seen. And off to the left, on a mountain, a tiny house with one window lit. Perhaps the bathroom. One of those drives where it's all too quiet and very late at night and everyone is tired and dreaming of sleep.
The above is an actual memory from when I was just a mere child. In a land far away from here.
Here are lyrics to "Life Kills." Something I know you all can relate to.

words and music by The Human League
published by Virgin Music (Publishers) Ltd.
* I am speaking about The Human Leagues 2nd album Travelogue. Before they went all cute-sy.

Simply called "Thanks" cause I worked on it Thanksgiving evening using Abelton Live.

I used the sounds from within Ableton's Operator synth. I still have to learn to tinker with it to produce more original sounds. Anyway, it was just a quick thing with not much thought put into it. I plan on doing more stuff. It's just been a little hard as I don't have all the things I need to comfortably sit and record.

So I hope you like it and I'd appreciate any remarks.

She got hungry and ate the wolf.

Thanks to This Twilight Garden blog, I was linked to this site where you can listen to many recorded concerts of such artists as The Cure, Duran Duran, Culture Club, Echo & The Bunnymen and more.

There was a time when some radio stations would broadcast these shows. I used to tape them. Among my tapes I've had concert recordings of Yaz, Duran Duran, Depeche Moe, Erasure, Thompson Twins. Can't remember if there were others. Some of these tapes have gone missing now but I remember listening to them over and over on my Walkman (remember those?).

It just seems like the Walkman is such an ancient piece of technology now in this age of mp3 players an phones that do everything. We can't call them "phones" anymore now can we? I mean, they take pictures, play music, they have video games, Internet, and don't forget the tip calculator. So I guess in the coming years, you will replace all gadgets with just one. At least there will be more space in your briefcase/purse/man-bag/man-purse/back-pack now.

"Their father is a terrifying, disembodied voice who is furious with them from the moment they first awaken. He doesn't say, "Welcome to the planet Earth, my beautiful children! Welcome to this paradise. Billions of years of evolution have shaped you to be happier here than anywhere else in the vast universe. This is your paradise." No, instead God places Adam and Eve in a place where there can be no love; only fear, and fear-based behavior, obedience. God threatens to kill Adam and Eve if they disobey his wishes. God tells them that the worst crime, a capital offense, is to ask a question; to partake of the fruit of the Tree of Knowledge. What kind of father is this? As Diderot observed, the God of Genesis "loved his apples more than he did his children.""

"Perhaps Genesis should be read as an ironic story. Here's a god who does not give us the knowledge of good and evil. He knows we don't know right from wrong. Yet he tells us not to do something anyway. How can someone who doesn't know right from wrong be expected to do the right thing? By disobeying god, we escape from his totalitarian prison where you cannot ask any questions, where you must never question authority. We become our human selves." 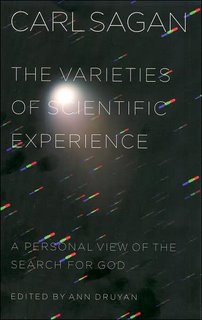 This coming December marks the 10 years since Carl Sagan's death. The weird thing is that the time he died was when I first acquired my first telescope (I did not know of his death until after the purchase). The owner of a small Astronomy shop in Phoenix Arizona where we would get our equipment from was surprised that there was suddenly a big boom in the interest in Astronomy and could not keep up with all the new orders he was getting.

So to commemorate this date, a new book is now available written by Carl Sagan. I'm very excited about it and can't wait to read it.

Based on the Gifford Lectures in Scotland, it is called "The Varieties of Scientific Experience - A Personal View of the Search for God." Edited by his longtime companion and collaborator Anne Druyan (pronounced Dreen).

Strangely enough, I *just* got done re-reading COSMOS. I think Carl Sagan's COSMOS ought to be on the required reading list of books in all schools.

Also, if you have cable, check out the Science Channel to see the Emmy award winning show COSMOS which is shown every Tuesday night. I watch it even if I've seen all the episodes. It's more than just "Billions and Billions."
Posted by V at 8:22 PM 2 comments: 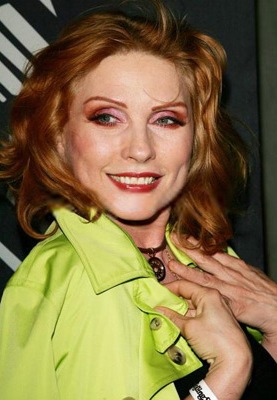 Below is the video which starts out being real funny but sadly, Debbie is not in the video. Though you do get to see "Moby" break dance.

Is there really a rumor that there will be a Blondie movie? Well check out this site and see the contenders. Who do you think should play Debbie's role? Gwen Steffani? I'm looking at a picture of Nadia Auerman and she seems dead-on. 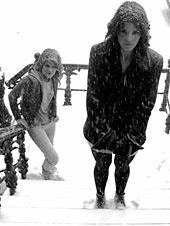 So I was completely surprised when I went to check out the Book of Love website to see if there was anything new going on. I was so happy to find out that Lauren and Ted have formed with vocalist Lori Lindsay the band THE MYRMIDONS. The name is based on Greek Mythology that basically means Ant People (?) And their sound is a treat! Check out their website and hear for yourself. The Book of Love signature "bellsy" sounds are all there and I can't wait to get my hands on their CD.

I'm just glad knowing that Ted and Lauren are working together and I hope there's a full length CD coming soon.

Clap (See The Stars) is their first single and I tell you it's the best pop song I've heard recently that took me back to the days of the first Book of Love release. The lyrics are fantastic:

The Myrmidons MySpace site.
Posted by V at 8:10 PM No comments:

Marc Almond (Marc & The Mambas) performing Black Heart live. This may be one of my favorite songs that Marc has ever written. It speaks volumes to me. I was fortunate to have seen him perform live during the late 90s at a place called The Bowery Ballroom. As he performed this song I have to admit I got very emotional.

I think so. While performing the song Say Hello, Wave Goodbye, Marc decided to come off the stage and walk into the crowd. He stood right in front of me and he gave me the opportunity to give him a big hug. Twice. Then he made his way back up the stage ignoring all other grabbers and huggers.

A moment I won't forget and at a time when I needed a hug so much, there couldn't have been a better person to do it with.

Marc recorded two double albums with the Mambas right after Non-Stop Erotic Cabaret. The insanity of fame caught up with him and because he was so young and inexperienced with such fame, could not handle it. These two double albums, Untitled and Torment & Torreros explain much of what he was going through. I remember one reviewer wrote for Torment that the album should have come with a razor blade to slash you wrists to. I know, a bit much, but you can feel it in a number of the songs how unhappy he was with the whole experience of being a pop star. He was also becoming addicted to a number of drugs. Imagine being high all the time and being the person Marc was with all the themes he was presenting, all the life of a seedy person living in an underworld of pain, sorrow and desperation - doing numerous TV show appearances in America performing Tainted Love. It just doesn't fit.

Both albunms have a certain feel to it. That being they're not so overly produced. He incorporates only accoustic instruments and very little keyboards. A complete departrue from Soft Cell.

It was during these two albums Marc introduced us to the world of Jacques Brel. Untitled contained the song If You Go Away while Torment included The Bulls. Also a cover version of The Velvet Underground's Caroline Says.

On this dreary and rainy day, this songs fits right in with the mood.
Posted by V at 11:55 AM 5 comments:

Ah - Another great song of the early 80s New Romantic era. Don't know much about the history of Classix Neouveaux except that I've had their album on vinyl and the lead singer's name is Sal Solo. Love that whole vampire look and I guess I should have posted this yesterday.

But - A great song to go crazy and dance to. It has one of those great guitar beginings. When the keyboards come in, that's when you just start moving. Real crazy. It's got one of the great choruses of all time with:

I'll have to look see if I can find their stuff on CD.

Well, it looks like this video has to be watched from the Youtube site, here's the url for it.
Posted by V at 5:30 PM 2 comments: