They're lemony and they're mighty 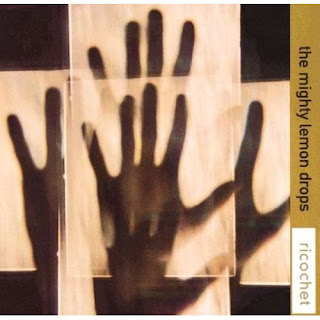 So I'm starting to import some CDs into my new computer and giving my iPod a fresh start. So far all the new stuff from Moz, Pet Shop Boys & Morrissey are in there.
So I'm going through my boxes as I have not straighten my CDs out yet and put them up proper - I spotted a much loved CD from times gone. The year was 1992 and it was slim pickings for me regarding this type of music. I think all that Seattle grunginess was coming towards us like some tsunami of flannel shirts and dirty long hair - I think it may have ruined it for me. Sort of clashed with everything I believed in. These were the days of Nirvana and Pearl Jam. Anything new by Morrissey at that time was a major life saver.
Side note - though the new Smashing Pumpkins might me worth looking into. Just heard a preview of their sound during trailers in movie theater (Star Trek if you must know).
Where was I? Oh, Ricochet. I can't remember what made me buy it. I hadn't heard a thing from it. But I got home, stuck it into the CD player and just loved almost every track. I haven't heard it for quite a while so it will be a welcoming sound during tomorrow's commute.
The Mighty Lemon Drops probably will appeal to those that are also into Echo & The Bunnymen, Jesus & Mary Chain, Lush and the like. And I write as if you've never head of The Mighty Lemon Drops but off course you probably have. I think "Inside Out" was a pretty big hit in the late 80s among the alternative playlists. Anyway, here's something out of Ricochet to help you decide on buying the whole album. I think they've been re-issued and re-packaged with extra tracks since.