Peace will come to me 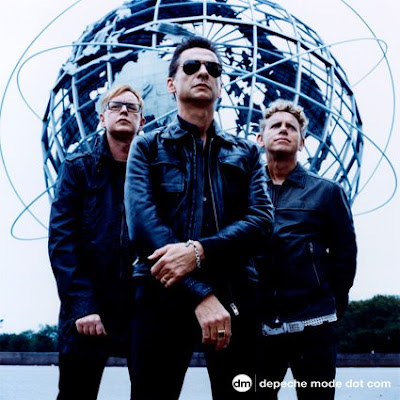 This is not a full review of the new Depeche Mode album "Sounds of the Universe." I must say that the track "Peace" has blown me over. Big time!

I heard the album today and in short I will say that it is analog heavy. They weren't kidding bout using a lot of vintage synths. The intro to "In Chains" says it all.

But "Peace" Oh man - I just love it. Somewhere out there Phillip Oakey is screaming "That's MY song." Just imagine Phil singing this and think of the pre-Dare Human League albums and you'd know what I mean. I daresay that this track borrows a lot from early Human League.

I'm staying away from anything YouTube related to DM or any review of any of their shows. I don't want any spoilers. And August is so far away!
I’m leaving anger in the past
With all the shadows that it caused
There is radar in my heart
I should have trusted from the start
Posted by V at 7:16 PM 8 comments:

It's been a month or thereabouts that I have not posted. Sorry if you've visited lately only to keep finding the last post over and over. I know when I followed some blogs it would frustrate me a little bit because of lack of updates. But there you go.

So what is the DIY that I'm referring to? Well, for a while I've wanted to put together a computer. Not one bought off the shelf, but one built by my own specifications and needs. The last PC I owned ran under Windows 95 and that was pretty brief. Since then I've been using a Mac.

Though I enjoy the Mac OS, I am not a fanboy. I'm bi. when it comes to platforms. Linux isn't that bad either, so I'm tri.

Anyway, I went over to NewEgg and proceeded to make my selections. I took some time off from work and waited for the goods to arrive.

Here's what I chose:

Monitor: Samsung P2370 23" - This was actually bought separately at BestBuy.

So on Tuesday everything got here and I set to work. Took my time and by Wednesday afternoon, I had everything put together and ready to power-up. The one thing I didn't do was put in the heatsink & cooler. I decided on the stock cooler. I don't know what I'm going to do with the V8 but maybe someday I'll decide to put it on if my system needs it. The thing is the size of my head! I have a feeling it's not going to fit my case though.

Anyway, I was really nervous putting my finger on that power button. I read so many reviews on some of these components that I chose where they either didn't work or arrived DOA or are faulty, etc. I was surprised and kinda shocked that everything began working so smoothly. Antec has these really nice fans inside the case with blue led lighting. When those lights turned on, the fans began to whir, and my BIOS began posting, I couldn't be happier. Yay!

So there we are. Prior to this, I thought about buying a Mac Pro but I think this was the more practical approach for my needs at this time. And this was a more fun experience rather than just opening a box and turning the thing on. I feel better about turning on my computer knowing that I pieced it together rather than it coming from an assembly line (even though the components are put together on the assembly line - but there it is.)

OK, that's as nerdy as I'm going to get with this post.

Very briefly, I'm taking the Red Radio approach to the new releases (Depeche Mode and Pet Shop Boys). I've had the opportunity to download these albums but skipped it. I prefer the old fashioned way of waiting for the release date and buying the darn thing and listening to it as intended. Though I've heard several of the new PSB stuff, I don't have the album proper.

That's all I got for now - But before I go, check this out.