Lately I've been feeling pretty Nostalgic and during my lunch hour today I went looking for some satisfaction. I looked up for a book store that specialized in the new age-y, spiritual stuff and found one not far from my building (you're never too far from whatever it is you're looking for in Manhattan.)

So off I went and found this quaint little cozy bookstore called The Quest in midtown. The smell of the incense gripped me as I knew it would and calmed me immediately. It took me back to the days when these things meant so much to me. There was nothing as peaceful and enjoyable as going to one of these bookstores and browsing the books and all the trinkets, alongside the incense, crystals, candles and scented oils. I've become a skeptic since and have abandoned these things. But I'm trying to re-visit those same feelings I used to get when things weren't as bad as they are today. I don't know that I believed in all of it because it was not so hard for me to let it go. But I do remember the times before and how enjoyable these outings were.

Back where I lived in Arizona, there was an area I used to hang out at called Mill Avenue. I have no idea what it has turned into today but back when I was attending graphic design school, I used to love hanging around there. There were some record shops, a comic book store and one placed called Changing Hands bookstore where I would browse the used books, buy a pack of Tarot cards and maybe a nice blank journal, probably with something Egyptian on the cover as I did a lot of journal writing in those days.

So back at The Quest -  I see it now, the Tarot card area. I see the Universal Waite deck, one that I already have but the one I have came in a different box. So let's buy another one for old times sake and  pick up a few packs of incense and an incense holder. It will be like old times. Will it? 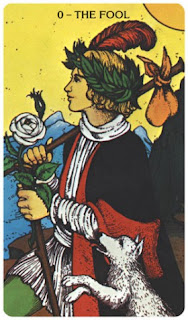 Upon my collection there is one that stands out. It's called the Morgan Greer deck. It's very special because it was given to me by a friend. Someone whom I sadly have no connections with anymore. And it is said that it's very special when someone gives you deck of cards. And It has always remained in my collection in its original box and I've done many readings with them in the past. They were given to me in the late 80s. Almost 25 years ago. I can hold those cards and can transform myself to those days and it will make me smile. It will also make my cry. Because I know that someone is missing now. And  because it's over and now it's only a memory. If only I could get on some time machine and go back and tap on my shoulder and whisper in my ear and say "You are young and there's so much you can do. Don't think too much about where you can't be and instead  make good with where you are at RIGHT NOW."  I'm sure that he never thinks about it now and I don't blame him. I will also never understand the whole situation. I can look at things and smile and remember some really good times. I remember the songs, the mix tapes,  I remember the restaurants and I remember the warm bright days. I remember a lot of fun times. But I also remember anger and other negative emotions. But I've only focused on the good parts today and I'm wishing for some of it back. It can never be like that again. Wishful thinking. It's the kind of thinking that can only be brought on by some kind of despair. I love him even though he doesn't believe it. And quite frankly, I don't know what brought on the things we did to keep us separated. We spent a lot of times together for a while and I'd like to think that it was because I was someone special and was fun to be around. It all ended sadly though and I was right to have left. The cards helped me make the decision.

In the background I can hear Depeche Mode's "Ultra" being played from beginning to end.

I took The Fool's journey that day in late August 1997. That journey has ended and it's time to close my eyes and step off the cliff one more time into the unknown.