Jennifer, where are you tonight? 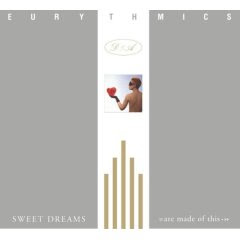 I'm like Muriel in this sense - You know, she's the one in that movie "Muriel's Wedding" where she was put down by the girls around her for being stuck in the 70s and listening to nothing but ABBA while they listened to The Baby Animals and Nirvana.

I've been listening to the Eurythmic's second album "Sweet Dreams."
This is one of those albums you can listen to all the way through and enjoy every song. When you have that much talent, you can make it work with anything you got around you. This album was recorded using no more than an 8 track recorder, drum machine, some synths and guitars. As the saying goes "less is more." Annie and Dave make a perfect team as like Vince and Alison of Yazoo.

1983 was all about image, music videos as well as the music istelf and gender bending was the name of the game. Annie had short cropped orange hair and wore men's suits. It was a nice contrast to Boy George, Marilyn and Pete Burns. 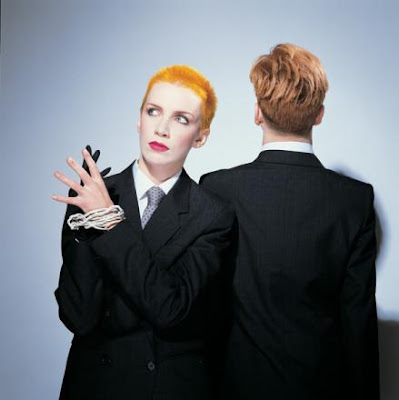 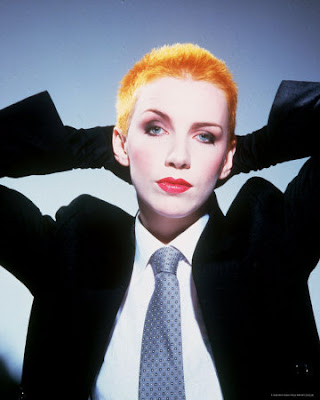 During the 1984 Grammy Awards, the Euryhmics gave an excellent performence of "Sweet Dreams." Annie looked rather like a young Elivs compelete with sideburns!


It's hard to pick a favorite from this album, but I will have to say that "Wrap it Up" is among my all time favorites. Annie sang this with Scritti Politti's Green Gartside.

Here's a version of the song and video. It's not the same as the one on the ablum, but still excellent and check out Annie's moves! 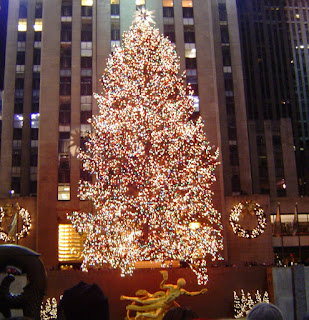 This picture was taken sometime ago at Rockefeller Center. I thought I'd recycle.

Wishing everyone a great holiday and peace, joy and love and all that good stuff. Whether you're with friends, family or just on your own, may it be special. 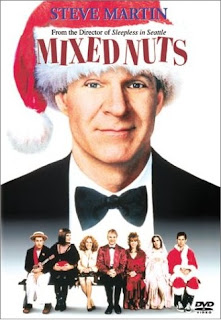 I'm just kicking back watching "Mixed Nuts." I guess this is my pick of holiday season movies not to be outdone by "A Christmas Story." I don't know what it is about "Mixed Nuts" that I find so amusing. Maybe it's because all the characters are so dysfunctional and Liev Shriebner is in drag or that Steve Martin runs a suicide hotline business.

You can practically watch the entire movie on YouTube

Hearing sounds of celebrations makes me lonely too 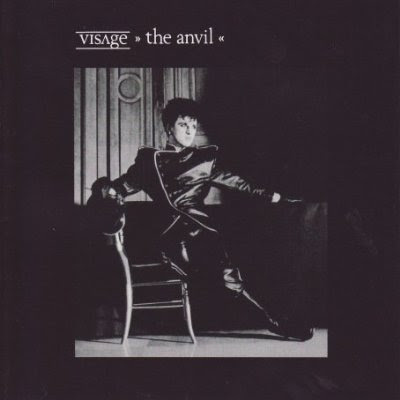 Finally the search is over! I have finally in my hands a newly re-issued CD of Visage's >> The Anvil << And with five extra tracks, it's a don't miss to any fan of the New Romantic scene.

Fronted by Steve Strange alongside Midge Ure, Billy Currie and Rusty Egan, Visage made some great pop music incorporating a lot of synths and clever guitar riffs. >> The Anvil << was originally released in 1982 on the Polydor label. This 2008 re-issue is by CherryPop a division of Cherry Red Records. This album is somewhat more darker than their self titled album which included the phenomenal Fade To Grey. Starting with a melancholy The Damned Don't Cry, then we go into a dark underworld night club scene at Anvil (Night Club School). The next track is my absolute favorite called Move Up. This track has been in quite a few of my mixtapes back in the day.

Here's where I have a problem with this. Why isn't The Anvil (Night Club School - Dance Mix) included as an extra track? If it's because they could not squeeze an extra track to make it into one CD, they could have removed those that clearly were not part of the album. Both We Move and Frequency 7 appear on other Visage CDs. So it didn't make sense to me to leave out The Anvil and Night Train dance mixes which would have made it a complete re-issue of the Anvil production.

The CD comes with a booklet of pictures and bio.

But I'm not complaining. I'm just glad I finally got a CD of this. It was re-issued once back in 1997 but I had completely missed out on it. Not to say that I wasn't searching for it at the record stores. It just wasn't there whenever I looked. 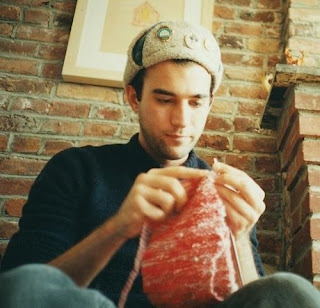 So I found this picture of Sufjan Stevens knitting up what seems to be a scarf. See, it's more common than you think, these men who knit.
Posted by V at 4:39 PM 4 comments:

Now I'm comming up for air

I never had to call the tune
'Cause I always drifted with the tide of the moon
I would go out every night
Looking for someone to treat me right
Not a chance, not a hope in this world

The soundtrack to our lives change with the seasons. Now the weather has turned cold and along with it a slew of tunes that highlight certain moments in our lives. One song that has been on my list of tunes lately is Erasure's "Breath of Life." I was in my mid 20s at the time working for an Insurance company and I remember having to walk to work around 6 am and would listening on my walkman containing a mixed tape featuring this song among others like Pet Shop Boy's "Dreaming of The Queen" and "The Theater."

It was quite an interesting time as I had finally found a few people to hang out with during the weekends. We had the designated driver who would pick each of us up from our houses like some school bus driver and head out somewhere to eat. Then, we would hop to a few bars and have a few drinks, maybe dance and hang around. These were nowhere special and were just places to warm up. We had two clubs that we spent the majority of our time at and pretty much stayed there until closing. One was called Prestons and the other was The Works. It so happens that it was the most happening times at either of these clubs during those years.

But still things were very awkward for me. But I have to say that during that time, I think I did pretty well compared to today with the whole socializing thing. I don't recall any of those nights ever being bad. If you were looking for that other kind of good time, where you would leave with someone, then you'd have to come alone. Otherwise, there were a lot of us doing the same. There were all these groups of friends that would all show up at the same time and you kind of just hung around together, drank together, danced and gossiped and had some laughs jabbing at the other groups and making up some stories of who they were. As far as love was concerned, it was still a hopeless world out there. But if I cut out that thought, I'd say I had a heck of a time.

I can still hear the echoes...

But you know, someone did save my life and I'm grateful for him. I was alone and friendless and there was all these fabulous clothes in the closet waiting to be worn. They thought they would never see the light of day.

I guess I had foresight for buying all those clothes. A phone call came one night and he said "A bunch of us are going out - want me to pick you up?"