Don't stare that bitch in the face

I got to see Clash of the Titans in 1981 when it came out. My brother took me which is very rare, but I guess even he knew I had to see this movie being that I was so much into fantasy and the like. I still love the movie and it was being shown last week. I sat and watched it and never thought that it was out-dated or anything. Same as if I was watching one the old Japanese monster movies. It's just something that was so cool to watch back in the day and you just have to take the trip back mentally and forget about today's technology to really enjoy these movies when they are shown again. 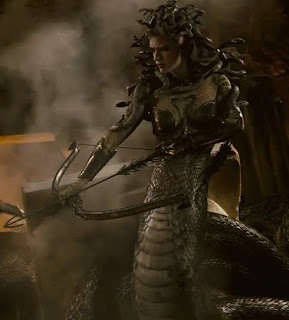 So last night I went to see the remake of this movie. I don't think this version of the  movie was made with 3D in mind because there really wasn't anything 3D specific in the movie. Sure, in the begining it seemed all great and everything but by the time you get into the middle of the movie, it just didn't seem 3D anymore. I get that today not a whole lot of people are going to the movies because like the music industry, the movie industry is losing a lot of money to downloads. So if you want people to come, convert to 3D, charge extra and make some dough.
This remake was like watching one of those made-for-TV movies that you see on the Sci-Fi channel. Oh excuse me, Sy-Fy. I did like it though I don't think they should have strayed from the earlier version. There was a funny remark to the old one in the movie and I won't give it away. But I always thought the one thing that made the old version a little cheesy was that freakin owl.
The best part, to me, was the Medusa scene. Same as the earlier version. The Kraken wasn't all that impressive. I couldn't even tell what the hell the thing looked like in this re-make.
Anyway, it's not a total loss but it just isn't enough for me to want to see it again. Even for free on cable. Though I will still watch the old version whenever I get the chance!
And really, you're not missing anything if you don't see this in 3D. Save your money.
Posted by V at 10:42 PM 2 comments: