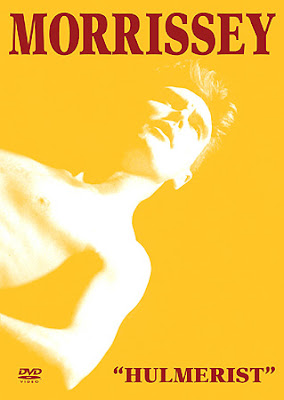 So last night I was feeling extremely Morrissey. Meaning I was sad, lost, alone and could not "find my place in this world." I could feel pretty high about life one day, such as being at a great concert and the next day I could be reminded how I still have far to go to be considered a "person."

And I said "V...Lots of things make you want to pop open a vein... But let's see if we can find something to replace that. Who knows what tomorrow brings.." You know the bullshit.

I was thinking about the early days of Morrissey solo bits and so I took a look into my box-o-video tapes and wondered "hmm.. which will it be? Live in Dallas? The Malady Lingers On? Introducing Morrissey? Ah, Hulmerist, that's the first one, let's re-live that moment."

I remember watching this a lot during its release in 1990. Moz was still so young, MTV was still showing music videos and 120 Minutes was airing. So music wise, it was still an exciting time.

In between the videos to the singles, you can a glimpse of adoring Moz fans going to the show. It's like Moz saying "I want the world to see how much I am adored and loved." From what I remember, when Moz first went solo and was to perform his first show, you got to go in for free and only if you were wearing a Smiths T-shirt. You see this in the video when people are lining up to go through security. There is one live performance in Hulmerist, that of "Sister I'm a Poet." Fans are constantly swimming through the audience to get to the stage and give their hero a hug, all the while Moz is showered in flowers from the audience. It was like The Smiths without Marr as Andy and Mike were also present in the videos.

I can't say whether watching this again since I don't know when the last time I watched it - made me feel any better. I know I smiled a few times and at times I felt like letting the flood gates open.

I've read lately that Marr is not opposed to a Smiths reunion. But much of that reunion rests on Morrissey which I feel will probably not want to do it. But think of the excitement this will cause among Moz fans if this were ever to happen. I think it would be big news in the music industry that The Smiths would reform if only for some live shows. Moz already performs the Smiths stuff during his live shows, but that's just a few select songs sandwiched between his solo stuff. Imagine a two hour Smiths concert! If it was one show one night in England, I might go out there just to be a part of it.
Posted by V at 7:25 PM 3 comments: 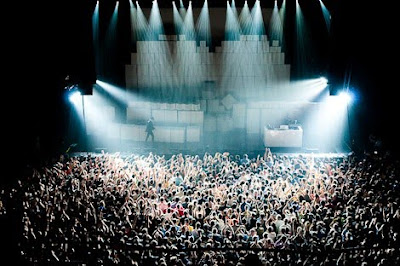 I'm actually down there somewhere near the front. Off to the right of the stage.
Well, this will go down in history as one of the most fun shows I've been to. I saw PSB once before on their last tour. It was nice, but I don't remember having as much fun as this one. Probably because the last time, they were in a bigger place with seating. This was general admission (if you had a floor ticket.)
At first glance their stage set didn't seem too impressive. It wasn't anything like the picture above. See what happened was that wall was a lot smaller at the beginning of the show. It collapsed to reveal behind it an even bigger wall, which later it also collapsed. It was just wild, I thought. What do I know? I needed some cheering up and this was the ticket.
The boys really had a lot of fun up there and they had these 4 dancers who ran around the stage. At one point throwing those boxes at each other. Assembling boxes, tearing them down, building them up. I don't know. It was a love affair with all things square. They even covered their heads in boxes. Something maybe Leigh Bowery might have cooked up.
The songs? There's music too!! The opening number was "Heart" and Neil sounded great. Though his voice seemed heavily processed, at times sounding as though he was lip-syncing. But I'm sure he wasn't. A lot of the set contained medley types such as "Pandemonium" going into "Can You Forgive Her." At one point I heard the beginning to "Paninaro" and I thought wow, this is a personal favorite! - but ended up with "Go West" which I think was the best part of the show!!
A great moment for me was when they performed "2 / 0" which was the first song from their first album "Please." I always loved that song. It really took me back.
"Why Can't We Live Together" was pretty good too and I think this is the song where the dancers came out wearing New York City building costumes (Empire State, Chrysler, Citigroup).
I thought it was a well rounded selection of songs. I loved hearing them perform "Being Boring" and last but not least a cover version of that Coldplay song. You know the one. Neil just HAD to do it in a crown and purple cape. But it was cool. The backdrop video looked pretty cool too in all black and white, Neil walking the streets wearing the king costume holding an umbrella. The song did also incorporate "Domino Dancing" so it wasn't a complete cover from beginning to end. I think as long as they were doing that, the Village People Cover "Go West," the Willie Nelson Cover "Always On My Mind," (and it was great!) - They should have also done "Where The Streets Had No Name."
"It's a Sin" was performed and right at the end we were showered with tinsel. Nice touch.
Their new material blended pretty well with the older ones. I have no complaints with this show. I had a lot of fun. The visuals were great. The performance was excellent. Total win.
"West End Girls" Ended the show.
Picture above was stolen from Brooklyn Vegan. Please click on the link more excellent pictures of the show.
Posted by V at 8:53 PM 6 comments: